I thought I was blown away by painting the room itself.  But now I am really standing back with my mouth hanging open.

So, I have these laminate pieces of furniture.  My husband bought these babies used about 10 years ago for about $350.  Since then, they have stood on either side of our bed, like sentinels, watching over us as we slept.  Basically, I've hated them.

Here's one of them: 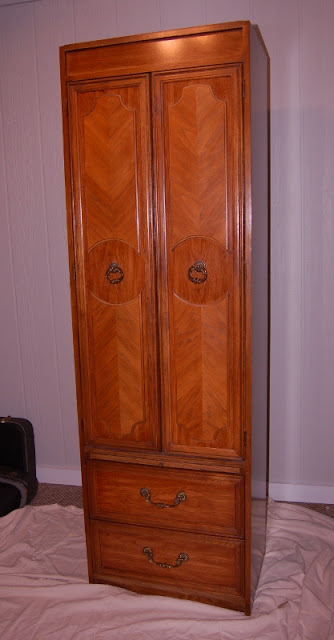 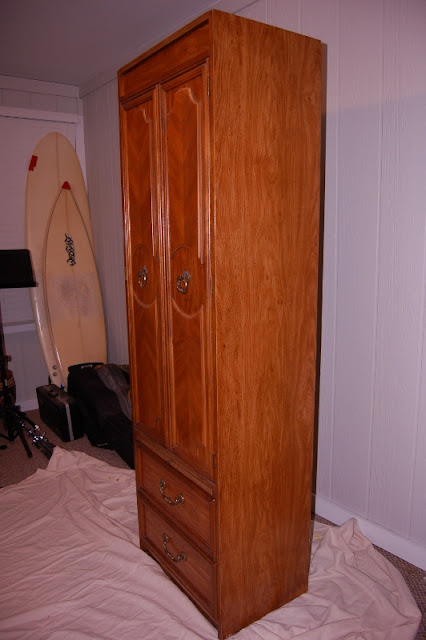 Now imagine one of those on either side of your bed.  To put this more into perspective, these guys stand about six feet tall, maybe a little more.  Last week, after we repainted the sunroom, I decided enough was enough already, and started making plans to transfer them out there and out of our bedroom.  But then I started wondering if I could make them better.  Because not only are they ginormous, but they're ugly, too.

So I did a little internet research.  And I found this over at Centsational Girl.  And I thought, well, if I destroy this laminate abomination by painting it, then I haven't lost much, have I?

So, this all happened on a whim and took all of last week, because I had to do it while the kiddos were asleep, either at nap time or after they'd gone to bed.  Which is why I didn't do much blogging last week.  But now that I'm done, I'm so excited!!

I won't give a full tutorial, but if you also have a laminate abomination that you'd like to paint, I would really encourage you to check out the tutorial over at Centsational Girl.  It was pretty easy to follow and so far, seems to have worked.  But I will give you the play-by-play.

First, I removed the drawers and took off the hardware: 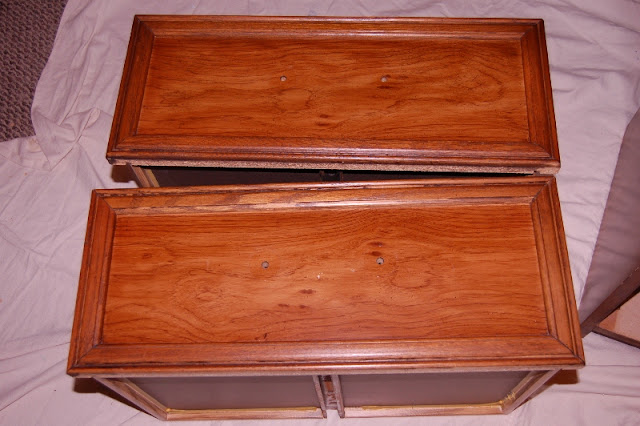 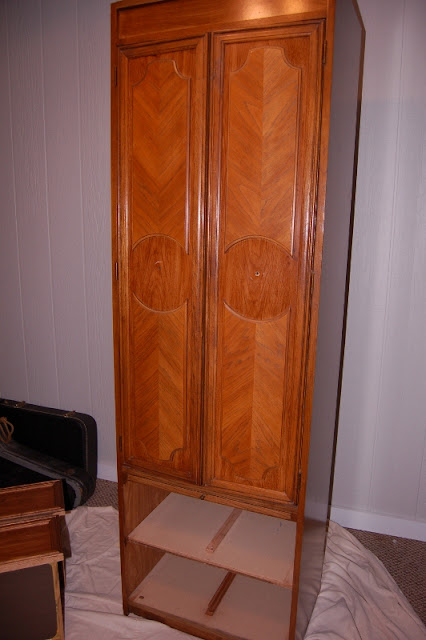 After much deliberation, I decided to leave the doors on and just paint over the hinges.  A few factors led to this decision.  First, I was a little unsure about whether this project would turn out, anyway.  Secondly, we didn't have the right tool at our house for removing the screws, so...I was a little anxious to begin and said the heck with it.  Thirdly, Dave made the point that it might be easier to paint the doors while they were standing upright rather than lying flat.  And finally, I figured that if I really hated the look of painted hinges, I could always switch them out later.

After I removed the hardware, I gave the entire piece a good scuff sanding, especially around the holes: 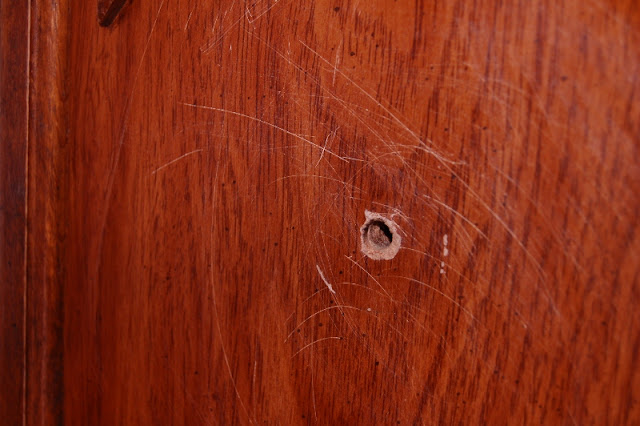 Then I primed it with oil-based primer: 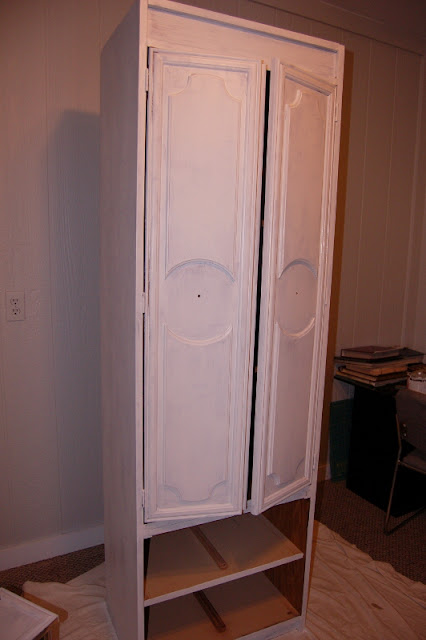 And gave it the first coat of my paint color.  The color I chose is called "Freshwater," by Sherwin-Williams.  I wanted something light and airy, something kind of beachy, and I was leaning toward something aqua colored.  This is what I came up with. 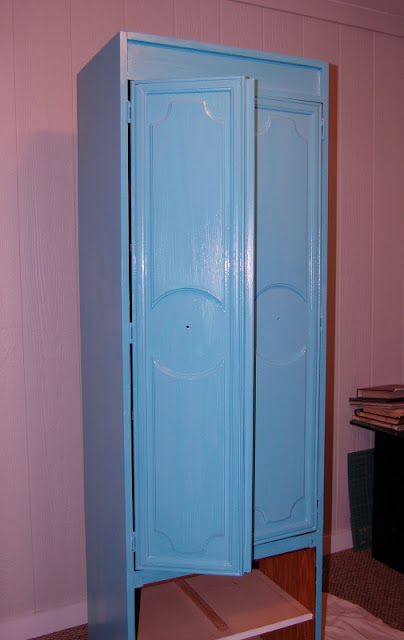 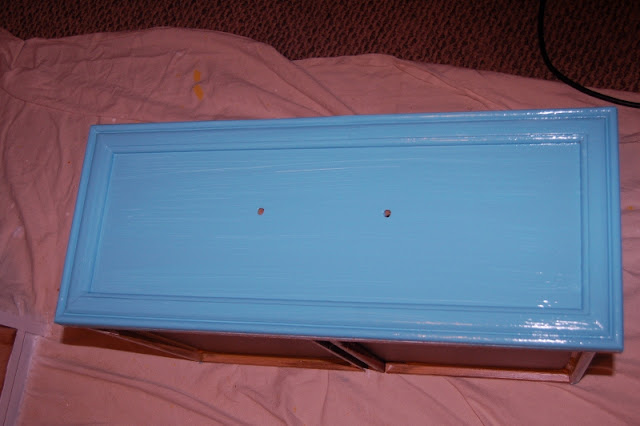 Once dry, I gave it a second coat.  And I am so happy with the result!  Who knew you could paint an ugly piece of laminate furniture and have it turn out looking like a "real" piece of furniture?  It has me itching to paint something else...but I think I'll just sit in the sunroom and enjoy this one for awhile. 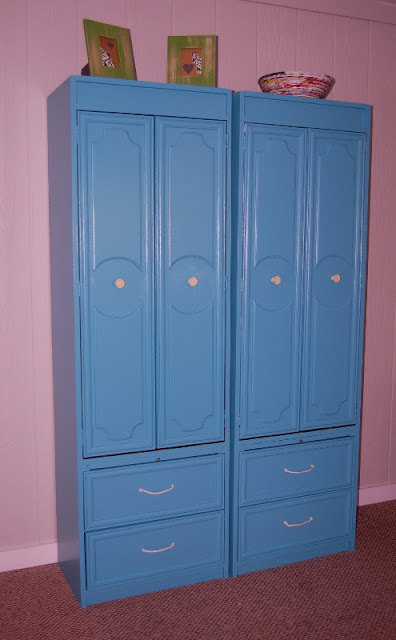 I bought the new hardware at Hobby Lobby.  They were $3.99 a piece, and I was all prepared to spend $16, but when I got to the register, she charged me $8.  Gotta love Hobby Lobby and their perpetual 50% off sales. 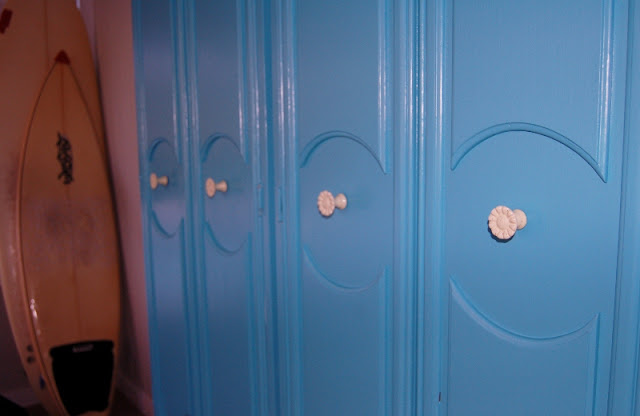 Here's a close-up of those knobs: 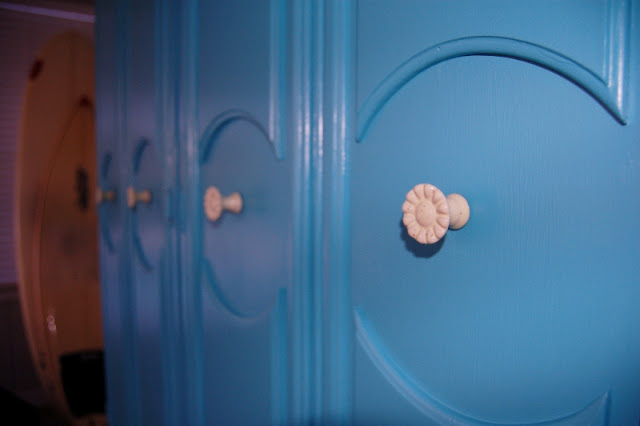 I didn't do anything with the drawers for a few days while I decided what could be done.  I wasn't about to put the old hardware back on.  Then I remembered a picture I'd seen once (sorry, I have no idea where).  Someone made a drawer-pull out of rope.  So, this isn't an original idea, but I sure do like it. 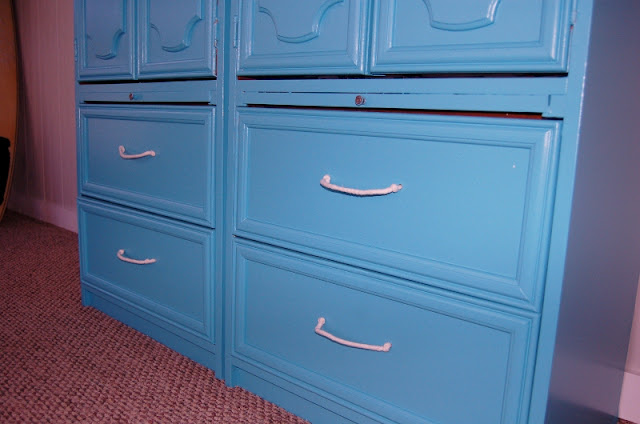 I'm not sure how well that's going to hold up in the long run, but if it starts to wear out on me, I can always go on a hunt for something different.

Here's one more full shot, just because I love it:

Has anyone else ever painted over laminate?  How did it turn out?  I'd love to see what you've done!

Thanks for reading!
Sarah

I truly love reading your comments!

I love having friends!

What are you looking for? 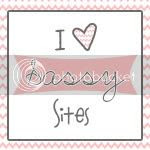